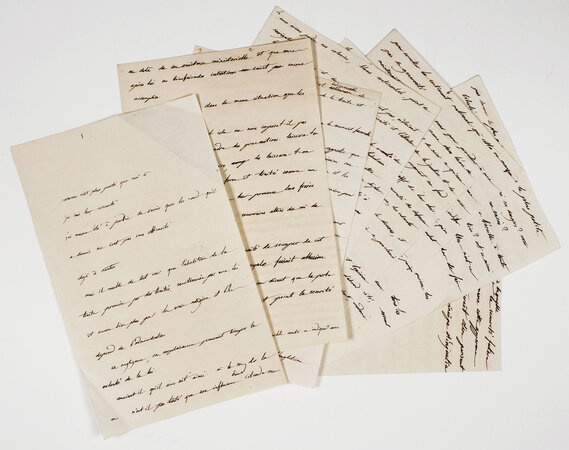 Manuscript on paper, 8 small leaves (150 × 100 mm), written on rectos only in a minute but legible hand. Loose, the first leaf slightly creased.

Slavery in France was abolished during the Revolution, but was reintroduced by Napoleon in 1804 and not finally abolished until 1838. In April 1826 Charles X had signed a treaty formally recognising the independence of Saint-Domingue (Haiti) and it seems likely that these notes were written for a speech given shortly after that date. Barante notes that some viewed the treaty as an act of submission, but he states that the king and the negotiators who signed the treaty had ‘une horreur sincère pour cet infame trafic’ and that the loss of the colony was no threat to France. In the light of the treaty, Barante believes that this was a favourable moment to advance the cause of abolition. Towards the end he refers to the famous saying of Robespierre: ‘Périssent les colonies plutôt qu’un principe’ (though he simply writes ‘périsse les colonies...’ here) but he goes on ‘ces paroles sont atroces — le premier de tous les principes est l’horreur du crime... Cependant ce principe auquel on faisait des sacrifices humains était un principe et de cruauté’. For Barante therefore the fight against the injustice and cruelty of the slave trade is of the highest importance, and these eight pages clearly reveal his humanity and support for the cause of abolition.
Prosper de Barante (1782-1866), a prominent liberal voice in nineteenth-century France was variously a diplomat, politician, statesman, historian and writer. From 1807-9 he was a ‘sous préfet’ in the department of Ardèche, and from 1813-15 prefect of Loire-Inférieure at Nantes. He made several diplomatic visits to Spain and Poland and was a close friend of liberal thinker Benjamin Constant. He was also a member of the Coppet group in the circle of Madame de Staël.