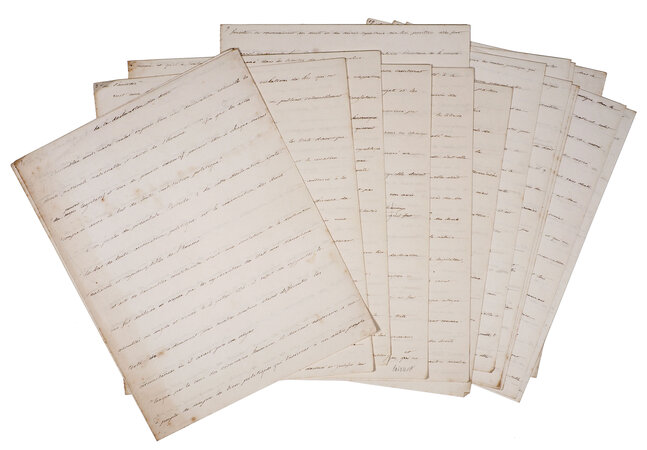 Manuscript on paper, 37 pages on 19 loose leaves (208 × 165 mm), c. 15 or 16 lines per page text in French, the text small and with frequent corrections but legible. Held with original paper band with title.

It deals with the various attempts to frame legislation on human rights from the English Bill of Rights of 1688, the Rights of Man in the American Revolution, the French Revolution, to his own time. He examines each and discusses the difficulties of framing a Declaration of the Rights of Man. This manuscript was evidently the basis of his essay ‘Déclarations des droits de l’homme et du citoyen’ published in Études littéraires et historiques (1858).

Prosper de Barante (1782-1866) a prominent liberal voice in nineteenth-century France was variously a diplomat, politician, statesman, historian and writer. From 1807-9 he was a ‘sous préfet’ in the department of Ardèche, and from 1813-15 prefect of Loire-Inférieure at Nantes. He made several diplomatic visits to Spain and Poland and was a close friend of liberal thinker Benjamin Constant. He was also a member of the Coppet group in the circle of Madame de Staël.