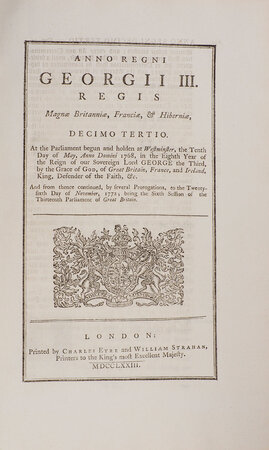 (AMERICA. TEA). ~ An Act to allow a Drawback of the Duties of Customs on the Exportation of Tea to any of His Majesty’s Colonies or Plantations in America; to increase the Deposit on Bohea tea to be sold at the India Company’s Sales; and to impower the Commissioners of the Treasury to grant Licences to the East India Company [drophead title]. London: printed by Charles Eyre and William Strahan, 1773.

First edition of the ‘Tea Act’, which notoriously permitted the East India Company to export tea direct to the American colonies duty-free — leading to the events in Boston Harbour in December the same year (The Boston Tea Party) representing the first salvo of the American Revolution. While intended to clear the struggling Company’s vast reserves of tea, the provisions of the Tea Act required tax to be paid by colonists on purchasing the tea, which like similar so-called ‘Townshend Duties’ levied by the British government, were violently opposed by the American Sons of Liberty.

Acts of this era were printed in limited numbers, usually estimated at around 1100 copies only. They were separately issued with a general title-page for the entire session (as here) but were habitually bound up into complete sessional volumes with numerous other contemporary acts.