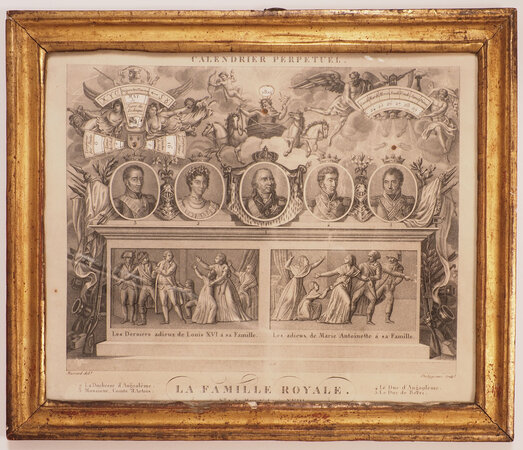 A rare moveable volvelle perpetual calendar depicting the French royal family as restored after the fall of Napoleon. The dials give years from 1816 to 1823, the dates for days of the week, along with lengths of day and night, sunrise and sunset, the month and the corresponding sign of the zodiac. A calendar giving traditional Gregorian dates such as this takes on a political aspect, printed as it was after an era in which strenuous efforts had been made to suppress the Gregorian calendar in favour of the revolutionary calendar and dates (years, months and days of the week) entirely reinvented.

The portraits of the royal family (Louis XVIII), the duc and duchesse d’Angoulême and the comtes d’Artois and de Berri, are placed above an architectural frieze depicting Louis XVI and Marie-Antoinette bidding farewell to their families before execution. The absence of the duchesse de Berri, who married the duke only in June 1816 provides the latest likely date of publication, though it is probable that the print appeared earlier — in December 1815, in preparation for the new year. We have found no record of this calendar print in the usual online resources, either in Europe or further afield.