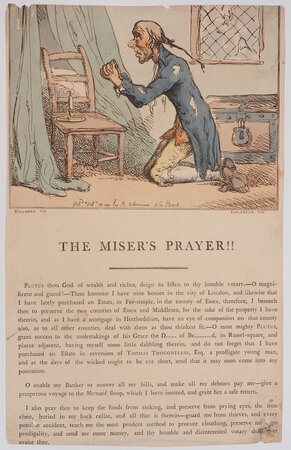 Sole edition. A thin man in shabby clothes kneels in prayer before a candle on a chair, his toes poking through his worn shoes. The window panes above a heavy locked strongbox are broken. ‘The miser confesses he owns nine houses, estates in Essex, mortgages in Hertford, large landed speculations in Russell Square and the neighbourhood, reversions of estates, trading ventures, “Mermaid” sloop, funded property, Government securities, &c. &c. he is beseeching an increase in his means, success in investments, and a rise in the “Stocks”’ (Grego). Rowlandson produced a series of such ‘Prayers’ as squibs in 1801. Grego, Rowlandson the Caricaturist, II, 30.