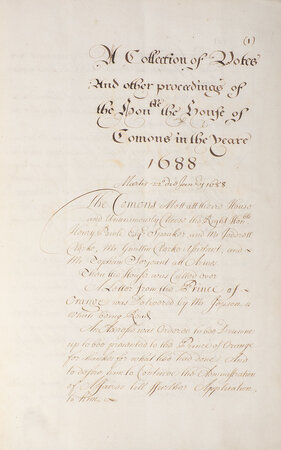 (BILL OF RIGHTS). ~ A Collection of Votes and other Proceedings of the hon[oura]ble the House of Commons in the yeare 1688/[9]. [London, end of the seventeenth century].

A contemporary or early manuscript copy of ‘The Votes and other Proceeedings of the honourable House of Commons’ recording the dramatic political background to the Glorious Revolution and with a complete copy of the Declaration of Rights (commonly called the ‘Bill of Rights’) and the more comprehensive ‘Heads of Grievances’ from which it was distilled. With Magna Carta, the Bill of Rights is one of the landmarks in the development of constitutional law of England (and by extension, America) setting out basic civil rights which would shape the structure of government into our own era. It set firm limits on the powers of the crown while confirming the place of parliament in legislation and the right to free speech within it. It also guaranteed the right to bear arms, but limiting it to Protestants in defence against the perceived Catholic tyranny of the deposed James II. The Bill of Rights directly reflected the philosophy of John Locke and stands as one of the landmark documents in the development of civil liberties in the United Kingdom and a model for later, more general, statements of rights including the United States Bill of Rights, the French Declaration of the Rights of Man and of the Citizen, the United Nations Universal Declaration of Human Rights and the European Convention on Human Rights.
It is included here, with much other parliamentary business, in a yearly manuscript volume of ‘The Votes of the House of Commons’. A distinct class of the record, the ‘Votes’ were kept by a clerk of the House and recorded business transacted on each day’s sittings, including the bills read, orders and resolutions passed, divisions, licences, and the like. Copies of the Clerk’s originals could be made for members of parliament and there was a limited circulation of the texts in folio volumes such as this, but they were not published in print until much later. Frankle, Robert J. ‘The Formulation of the Declaration of Rights’. The Historical Journal, vol. 17, no. 2, 1974, pp. 265–279. cf. D. Menhennet, The Journal of the House of Commons: A Bibliographical and Historical Guide, 1971; M.F. Bond, Guide to the Records of Parliament (1971).