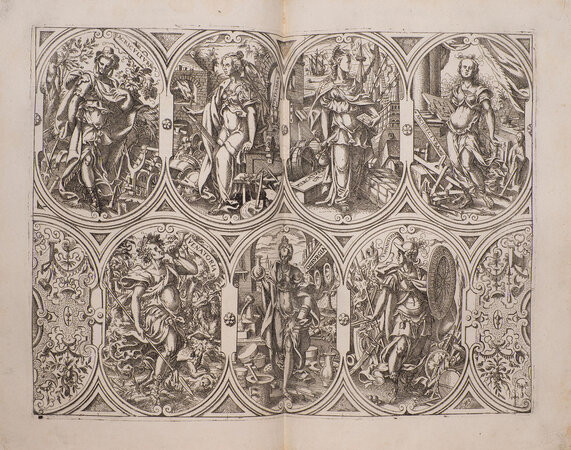 Folio (325 × 200 mm), [12], 393 [i.e. 396] leaves, plus [12] folded etched plates, 40 woodcut coats of arms to text (including the large arms to head of dedication), woodcut initials. Contemporary manuscript numbering to versos of plates and adjacent text leaves as instructions to the binder, some neat early rubrication, underlining and notation in plummet to early parts. Light browning to text, one plate with short closed tear to ‘eft hand margin, just running into the image without loss, title with portions cut/torn from the top and lower forecorner (removing ownership inscriptions) and very neatly replaced at an early date and a French ownership inscription (’Francisci Pichard’) added, perhaps in the seventeenth or eighteenth century. Contemporary limp vellum with yapp edges, later paper spine labels. Wanting ties. A very good copy.

A spectacular renaissance illustrated book, the first edition with the detailed and dramatic double-page etched plates by Jost Amman. First published at Lyon in 1529 with single-page woodcuts (reprinted with the same woodcuts in 1546) there were also Venice editions of 1569, 1571 and 1576 with quarter-page woodcuts.

A vast encyclopaedic work, the Catalogus gloriae mundi sought to set out the hierarchy of creation —animate and inanimate, from the heavens themselves to the governments, laws and sciences of humanity. Its particular value was in setting out orders of precedency and protocol in law and ceremony, which probably accounts for its interest to publisher Sigmund Feyerabend, who enlisted Amman to create large emblematic plates for this edition, derived from the earlier woodcut illustrations. They are:

1. A genealogy with insignia of royal houses (including European houses and those of Persia, Egypt, Israel etc); 2. Adam and Eve in the Garden of Eden; 3. a mandala depicting the ranks of the hierarchy of the heavens; 4. a sitting of the papal court; 5. an imperial council; 6. a regal council; 7. a judicial court; 8. the nobility; 9. the military ranks; 10. The liberal arts and sciences (14 female personifications); 11. the mechanical arts (7 female personifications); 12. a geocentric cosmography. Andresen, A. Jost Amman, 32-43; The New Hollstein: German Engravings, Etchings and Woodcuts 1400-1700, 1998, VI.144. A very scarce book. Worldcat lists non-European copies at Folger, Getty and Huntington libraries only.