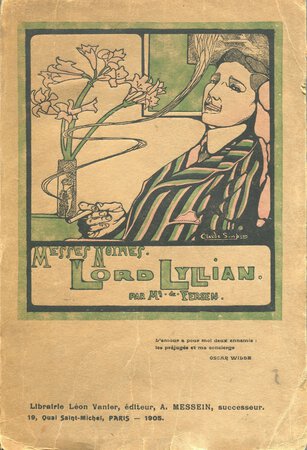 Large 8vo (232 × 155 mm), pp. [4], 206, [2]. Browned. Original printed wrappers with large illustration (signed ‘Claude Simpson’) in green and black to upper cover, adverts to the lower. Also browned with some rubbing and creasing to spine and edges, with occasional very slight losses, but actually a good copy of a rare and fragile book.

First edition (despite the mention fictive ‘deuxième édition’ on the title-page). A pioneering gay narrative and one of the first novels written about Oscar Wilde after his conviction. Messes noires is the story of Lord Lyllian, a tragic character born in Scotland with a striking overt resemblance to Wilde, addicted to adolescent boys and to opium. It was written on the Island of Capri where Fersen had fled following his arrest in France (for indecent assault and exciting minors to debauchery in the course of a series of soirées dubbed Messes noires). Fersen had formerly associated with a coterie of Paris decadents including Jean Lorrain, Robert de Montesquiou and Karl-Joris Huysmans, but his 1903 arrest caused a scandal in the press, who were quick to dub him ‘un nouvel Oscar Wilde’, and he was ostracised by almost all his former literary friends. The cover and title-page of the novel bear the Wildean epigram ‘L’amour a pour moi deux ennemis: / les préjugés et ma concierge’.