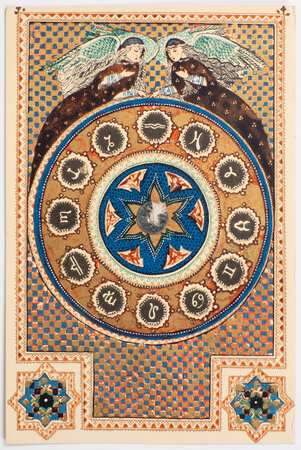 First edition of Lydis’s astrological dream dictionary, complete with the moveable volvelle horoscope and striking plates printed in colours and gold. Among the numerous dream motifs interpreted in brief, Lydis chooses the for full-page miniatures: the whore, the angel, flight, locusts, insects (she actually depicts a spider), sea creatures, suicide and the devil.

A fragile book, this is among the early works by Austrian born Lydis (1887-1970) who settled in Paris in 1926. She became known for her daring prints celebrating same-sex and bisexual love (notably her 1926 portfolio, Lesbiennes) and she later illustrated numerous deluxe editions of Boccaccio, Louÿs, Baudelaire, Mirbeau and Valéry. Lydis had no formal artistic training (or at least her education is obscure) but her work was no doubt inspired by the freedom of twentieth-century Paris. She escaped the Nazis during the occupation, living briefly with her partner Erica Marx in England, before the couple emigrated to Buenos Aires.