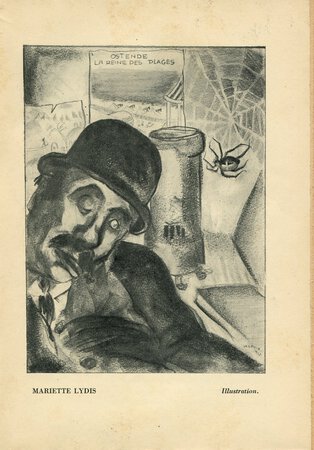 8vo (192 × 130 mm), pp. 203, [13] (including adverts), the Ulysses fragment on pp. 107-131, illustrations. Original orange wrappers, the binding spotted and rather shaken, with some closed tears to the spine, but a sound and acceptable copy of a rare and fragile journal printed on rather poor quality paper.

The earliest portrait of Leopold Bloom. Mariette Lydis contributed one illustration to the first issue of “900”, placed with the fragment of Ulysses in the French translation by Auguste Morel. The image, captioned ‘Illustration’ is dated 1925 at the foot. No earlier illustration of Bloom is known (nor indeed any earlier illustration of Ulysses) and the standard idea of him is drawn partly from Joyce’s own inept sketch of him made in Paris in 1926. The image is clearly identifiable as a Leopold Bloom-like figure, yet is perhaps not a direct illustration (what are we to make of the Ostende tourist poster in the background, for example?) but no-one appears to have noted or commented on this remarkable image by an important female artist of the 1920s. While Slocum & Cahoon record the appearance of the text, the image is passed over in silence.

Joyce was nominally a joint editor of the radical literary review “900”, with Massimo Bontempelli. Mariette Lydis was Bontempelli’s lover at this period (her letters to him are preserved at the Getty Institute) and probably also know Joyce. She sketched his portrait the following year in Paris.

The Ulysses excerpt translated by Morel is episode 4, ‘Calypso’, introducing Leopold Bloom with his morning visit to the butcher’s shop for a kidney for Molly’s breakfast. James Joyce is listed among the journal’s editors on the half-title verso (along with Bontempelli, Ramón Gómez de la Serna, Jerog Kaiser and Pierre Mac Orlan). Among the adverts at the end of the volume is a full-page for the forthcoming German edition of Ulysses by Rheinverlag of Zurich (the book appeared in the autumn of 1927). Another advert is for the journal Critica Fascista (a ’Fortnightly Fascist Review’). Slocum & Cahoon, A Bibliography of James Joyce (953), D25 (p. 113).