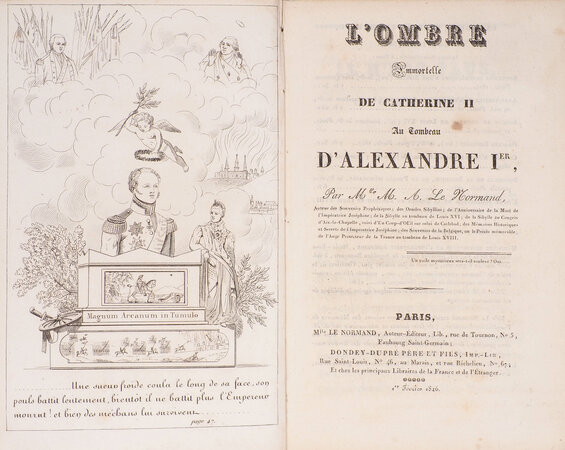 First edition of Le Normand’s panegyric for Alexander I and her prophecies for the state of Russia following the Emperor’s death in 1825. Marie-Anne Lenormand (1772–1843) was a celebrated (or notorious) clairvoyant, publisher, and self-publicist Famed throughout Europe for her exclusive clientele, she popularised cartomancy and spawned an enormous wave of imitators. At the height of her career she claimed to have advised the likes of Robespierre, Talleyrand, Metternich, the Empress Josephine and Emperor Alexander himself; others argued that the whole thing was a sham, and she was frequently arrested, spending several weeks in prison.

The title verso here gives a list of Le Normand’s other prophesies, both published and forthcoming. Though the half-title verso bears an author’s statement, requiring authorised copies to be signed by her, this copy is unsigned (though genuine).