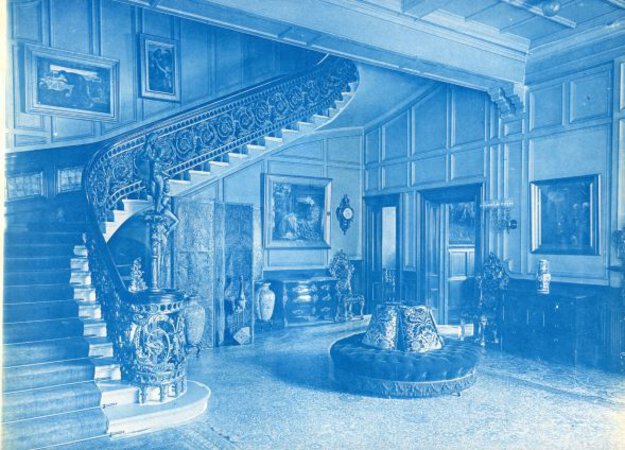 86 cyanotypes (each approximately c. 240 × 295 mm or the reverse, on paper 247 × 302 mm), titled and numbered in the negative, 3 signed ‘B.L. & Co’, some others with company catalogue number. Loose, without the cloth backed portfolios in which some sets were issued.

A superb complete set of Lévy’s cyanotypes depicting English domestic interiors of the 1880s and 90s printed directly from Henry Bedford Lemere’s negatives. The photographs primarily document the interiors of houses in England, Scotland, and Wales (as well as a small number of public buildings) and include excellent depictions of paintings and furniture. They include entrance halls, reception rooms, stairwells and fireplaces, with key details such as paintings, furniture, panelling and tiling clearly recorded, all allowing identification.

These are rare, though two sets survive in American libraries: at Yale Center for British Art and at the Getty ― the latter incomplete but with a partial list of subjects, allowing identification of some 50 of the 87 prints ― Parham Park (Sussex), Astley Hall and Standish Hall (Lancashire), Swan House (Chelsea, London), Monkhams (Woodford, Essex), Curling Hall (Ayrshire) and The Cottage (Walton Heath, Surrey). Of special interest are the three plates (numbers 1-3) of Dawpool, (Thurstaston, Cheshire) home of Thomas Henry Ismay, chairman of the White Star Line, which clearly show Rossetti’s painting The Loving Cup purchased by Ismay in 1892. Another is of 49 Prince’s Gate, London, home of Frederick Richard Leyland showing another Rossetti, La Pia together with Burne-Jones’s Wine of Circe. 49 Prince’s Gate was one of the most celebrated aesthetic interiors of the period with a magnificent staircase (transferred from Northumberland House) and many other works of art including French furniture, Flemish tapestries, oriental Porcelain and Italian bronzes. Leyland’s collection was sold in 1892, making this image an especially valuable record.

‘[Bedford Lemere & Co.] was very astute in selling large numbers of its images to architects and craftsmen who wanted to appraise themselves of what their colleagues were doing or build up a body of visual examples for use in their own work’ [Culture 24, 7 May 2010]. They also clearly licensed some of their images to publisher’s abroad, in this case to Albert Lévy whose celebrated cyanotypes were widely distributed in France and the United States but are now rare in complete sets.