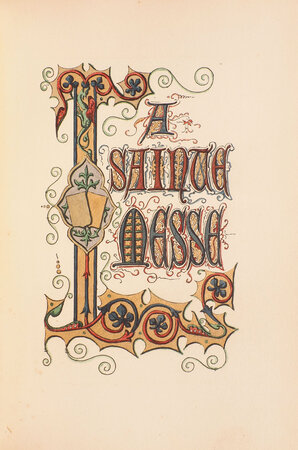 An excellent example of a French neo-gothic prayerbook, imitating many of the forms of medieval manuscripts, designed to be illuminated by hand by (or for) the owner. The photogravure text and borders were printed in monochrome and could then be coloured to the owner’s taste. In this example, a manuscript note on the title verso, ‘Enl. Charles DeFrance. 1883’ gives the identity of the illuminator, whose work is both accurate and sumptuous.
Mademoiselle A. Rabeau was an interesting figure in the revival of illumination in late nineteenth-century, providing instruction in this popular art (see Hindman, Manuscript Illumination in the Modern Age, p. 152). In fact, there were two A. Rabeau sisters: Amélie and Adrienne — both contributed illuminations to the exhibition ‘Miniaturistes et Enlumineurs de France’ in 1894 (La Plume, 1894, 303). The 1882 Livre d’Heures was a popular publication (examples survive with different levels of illumination) and was often given as a First Communion gift, usually but not exclusively, to girls. It contains a final leaf on which the recipient could record the date of their later marriage but in this case it has been left blank.