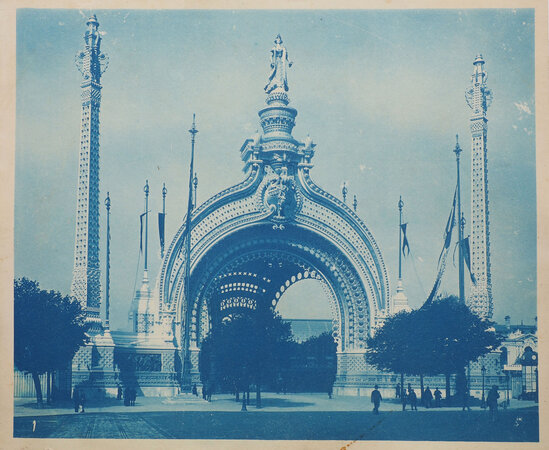 100 original cyanotype photographs on paper, each c. 288 × 237 mm on sheets 297 × 245 mm, most numbered in the negative, a few with margins just showing the marginal extremities of an adjacent print. Complete with 4-page letterpress list of contents. Loose, as issued, without the original publisher’s portfolio. A superb set.

A rare and spectacular set of 100 original cyanotypes of the buildings and pavilions of the 1900 Paris Exposition Universelle. The large format prints include the Porte monumentale and a series of views of the monumental Grand and Petit Palais together with the national pavilions and those devoted to the arts, industry and commerce. Besides the two Palais, the majority of the buildings were temporary — built on iron frames covered with plaster and artificial stone — and most were demolished immediately after Exposition closed. Levy’s large format prints for the Merveilles are a beautiful and valuable record of their architectural variety.
Albert Lévy (1847-1931) was both a pioneering and prolific architectural photographer, unusual for his time in working on both sides of the Atlantic, with studios in Paris and New York. Characteristically, his collections were issued as cyanotypes printed directly from the original glass negatives. His collections included numerous sequences of French, British and American buildings of the Gilded Age, but many, including the Merveilles et les originalités architecturales a l’Exposition are now very rare indeed.