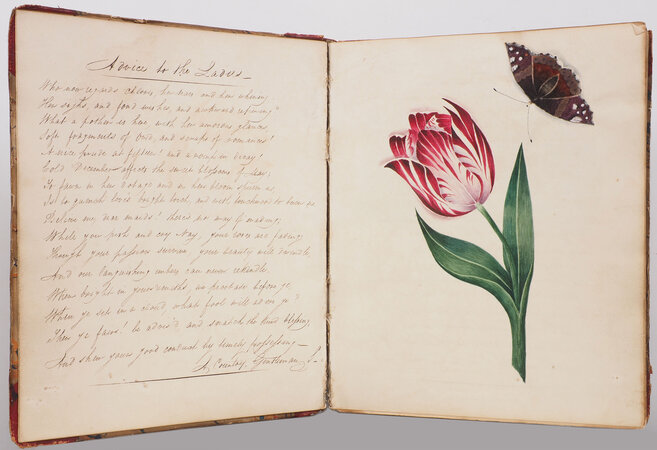 Manuscript, 4to (228 × 185 mm), pp. [136], including several blanks, plus further blanks at rear, some leaves of coloured paper. 27 watercolour illustrations including flowers and butterflies (the latter usually cut and pasted to leaves (one small one has been removed) and 9 pencil sketches. Contemporary red half morocco. Spine and corners worn, the former with portion (c. 35 mm) missing at foot) but all secure.

A good and typical illustrated commonplace album with transcribed verses, drawings and watercolours. The selections are very much representative of the contemporary fashion among women for such manuscript collections, with poems by Byron, Goldsmith and others, verses of friendship, loss and leave-taking, nature poems, riddles and aphorisms. A nicely self-aware inclusion here is Benjamin Franklin’s humorous ‘Paper a Poem’ relating paper types (gilt paper, copy paper, brown paper, foolscap, touch paper, waste paper and so on) to human analogues. The relatively few poems by women include Ann Radcliffe’s ‘To the Nightingale’ and ‘To Anne’ (unattributed here but by Mary Anne Browne, 1812-1845, entitled by her ‘Written in an Album’). Most of the contents have been entered within a few years of 1828 followed by a scatter of much later entries of the 1870s and 80s towards the end.

The best account of the album genre in the history of reading and writing we have come across is by the late William St Clair in The Reading Nation in the Romantic Period (2004, pp. 224-9) in a passage which could aptly serve as a description of Ann Jordan’s album.