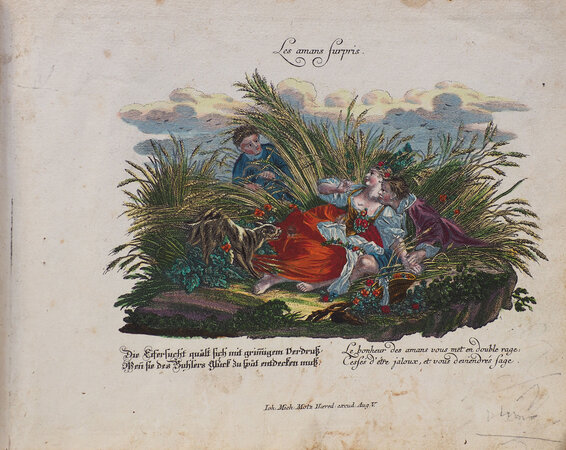 Oblong 4to (166 × 207 mm), 54 hand-coloured engraved plates with captions, some heightened with gum arabic and gold. Significant thumbing with occasional stains, though generally clean, some marginal tears, usually closed and without loss, 3 plates with long vertical tears, 2 of which have basic early repairs to the verso, one using earlier printer’s waste, and 2 with old early reinforcements at the gutter. Some pencil scribbles. Somewhat later blue paper covered boards, worn, wanting front free endpaper, rear endpapers with childish pencil scribbles/drawings (one a very nice drawing of a young boy) including the dates 1810 and 1816.

An interesting collection of 54 rare hand coloured plates by Augsburg publishers Johann Michael Motz and Albrecht Schmidt, very much in the style of the recreational and educational prints of the slightly earlier Augsburg engraver-publisher Martin Engelbrecht. Like Engelbrecht’s these prints were intended for popular consumption and were often cut up for albums or other decoupage projects. All are very rare, notably the fine 4-plate suite of the continents here (Europe, Asia, Africa and America) and a very substantial part of the biblical sequence by Schmidt. There are also plates for the four, two hunting plates and another after Boucher. The album was evidently put together c. 1800 from two or more constituent parts, perhaps already quite well used to judge by the variation in condition across the collection and by the various patterns of previous stab holes. An early owner/user has added some amusing pencil drawings to the rear endpapers.