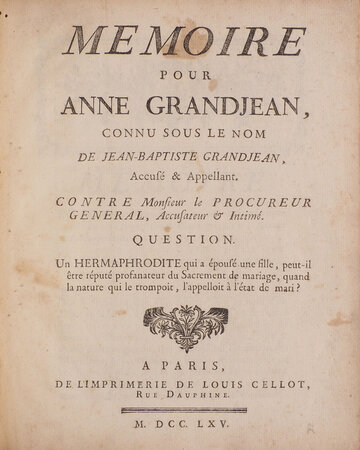 First edition of this important legal memoir, the official record of the trial of Anne Grandjean (later Jean-Baptiste). Anne Grandjean was born at Grenoble in 1732, and baptised and raised as a girl until she discovered her attraction to other girls at the age of 14. Confessing this to her father, he was convinced of her feelings, and had her re-baptised as Jean-Baptiste, insisting she live as a young man. At the age of 32, while living as a married man at Lyon, a childhood friend informed Jean-Baptiste’s wife that she had married a ‘hermaphrodite’. Subjected to judicial enquiry, Grandjean was declared to be female and banished in perpetuity with the requirement that he live as a woman and have no further congress with the female sex for the rest of his life.
The official memoir of the case is thus a remarkable source of detail concerning contemporary orthodox notions of sex and gender. The case and the verdict reward a very close reading and yield several immediate observations. Firstly, the term ‘hermaphrodite’ is used to denote same-sex attraction rather than in a physiological sense, secondly, the decision to change gender was made under the advice of a Catholic confessor who counselled that to remain a woman attracted to women would inexorably lead to a crime in the eyes of the church and, thirdly, a major objection to the transition was that Jean-Baptiste had unlawfully adopted the legal status of a male citoyen. Gay III, 107.