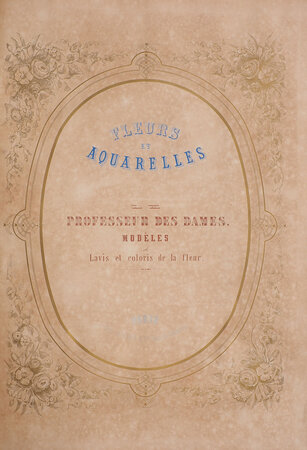 Folio (400 × 275 mm), colour lithograph title page (red and blue within gold border) plus 12 colour printed plates, each c. 190 × 150 mm, mounted on thick paper leaves with gold borders, finer paper guards between each. Some foxing to the title and thick paper leaves, slight fraying to some margins, but the mounted plates themselves very clean. Original publisher’s boards, the upper cover reproducing the title page. Rubbed and soiled, upper joint broken, but secured by endpapers. An unsophisticated copy of an otherwise unrecorded book.

Sole edition. A colour printed curiosity, reflecting the fashionable pastime of flower painting from printed models, of which we can find no other trace in bibliographical or other records, despite its printed title by a well-known Parisian lithographic printer. The images appear to be coloured lithographs, printed successively in single colours (rather than a single impression with the stone or plate inked with all the colours at once). Aubert and compagnie’s output of regular lithographs (sometimes hand coloured) was very large in the this period (notably of caricatures by Daumier and others) but we can find no comparable examples of attempts by them at colour printing like this. While successful enough, and certainly attractive, this was perhaps a short-lived experiment by Aubert in response to developments in colour printing by xylography pioneered by George Baxter in England. A similar title Professeur des Dames was advertised by Aubert in 1848, but this consisted of 6 fashion plates in regular lithograph.

The Aubert firm was founded in 1829 by Charles Philipon and his brother-in-law Gabriel Aubert. It was first established as the Magasin des Caricatures in the Passage Véro-Dodat in 1829 but moved to the Place de la Bourse in 1841 (which helps us to date this imprint with the latter imprint)at the same time established its own lithographic printing press publishing as ‘Aubert et Cie’ as here. Gabriel Aubert died 1847