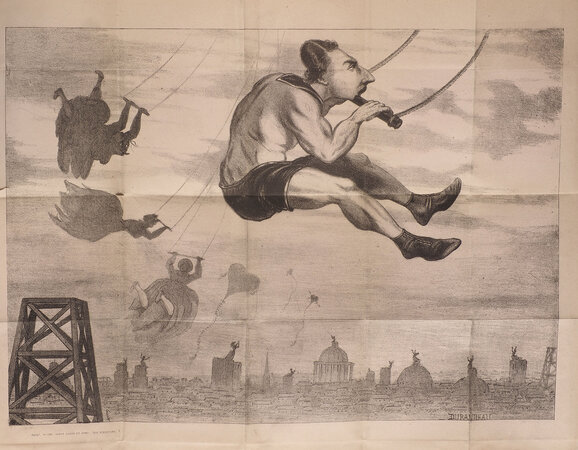 16mo (140 × 90 mm), pp. [4], 188 including half-title, title with wood engraved portrait by Choquet. Large folding lithographed plate at rear by Durandeau. Some foxing, old waterstain to lower gutter towards the rear. Original pale blue wrappers with wood engraved illustration and advert. Soiled and slightly chipped, paper at spine splitting, but the whole secure and still a good copy of a fragile book.

Rare first edition of the memoirs of the great circus performer Jules Léotard, pioneer of the flying trapeze who inspired the 1867 song ‘The Daring Young Man on the Flying Trapeze’. A second edition of his Mémoires appeared in the same year, with the same pagination, but giving ‘deuxième édition’ on the title — almost all library copies appear to be of this later edition. The superb comic lithograph by Durandeau shows Léotard trapezing over the city of Paris, while adoring female fans cry out to him from the rooftops (some flying heart-shaped kites). With Blondin, Léotard was one of the first great celebrities of the circus, when he visited London in 1861, Charles Dickens wrote: ‘I have been beguiled into seeing Léotard, and it is at once the most fearful and most graceful thing I have ever seen.’ (Letter to Macready, June 11, 1861).