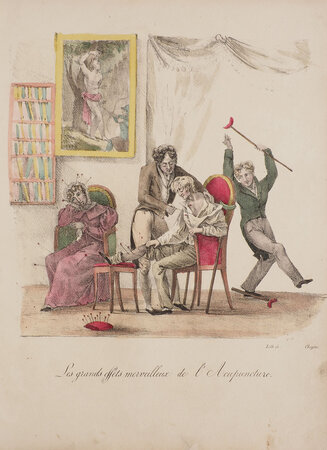 A rare and amusing satire on the practice of acupunture ― much in vogue among certain Parisian doctors in the early nineteenth century. A sickly male patient is receiving a doctor’s needles, the longest of which is seemingly destined for his heart; a young woman in a bonnet seems unimpressed with her needles (one pierces her tongue); while a young man throws down a set of crutches. On the wall behind hangs a painting of the martrydom of Saint Sebastian. Though known in France since the seventeenth century, acupuncture was revived in the decades after 1800 — Doctor Louis-Joseph Berlioz (1776–1858, the composer’s father) claimed to have used it successfully in 1810 and published a paper on the subject, while Jules Cloquet published his influential Traité de l’acupuncture in 1826.
The print was listed in the Bibliographie de France for 1825 (p. 172). It was published by Mantoux and Cheyère (cf. the Paris Musée Carnavalet copy) though in our example Mantoux’s name has been cancelled in the imprint line.