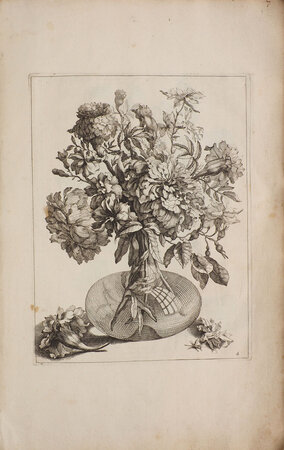 Small folio (320 × 195 mm). 20 engraved plates, including title page. Some old staining and soiling, title quite thumbed, with some spotting and an old ink splash to the upper margin of 4 plates with waterstain to lower margin, running into the lower part of the plate, a few sports of coloured paint or wash, a few short marginal tears, all indicating early use. Limp vellum, reused from an earlier French manuscript document (on which a date of 1591 is just visible), three exposed vellum laces towards the spine on upper and lower covers, original tawed leather ties. Inscription to foot of title ‘À Nicolas Despeche 1684’. Quite soiled and creased. A pleasingly unsophisticated copy, retaining large margins, with no signs of restoration.

First edition. A very rare collection of floral engravings for the use of goldsmiths, artists or needleworkers, this copy evidently used by an artist at an early date (perhaps the Nicolas Despeche, whose 1684 inscription appears at the foot of the title). With 20 plates in all the collection comprises the 10 plates from the Livres de Fleurs (including the title) plus an additional 10 plates (4 signed in the plate by Vauquer with the imprint of N. Langlois, the remainder unsigned) evidently combined in the early 1680s from the selection of Vauquer plates offered in Paris by publisher De Poilly.
Vauquer (or Vauquier) was an etcher, draughtsman and gold-engraver (1621-86). His superb prints show a ‘delicate line, after his own compositions and those of Jean-Baptiste Monnoyer, his master and kinsman. Apart from a few biblical subjects on black ground for medals, snuff-boxes or watch-cases, he mostly represented flowers in bouquets or in vases, baskets, garlands or friezes. These were published by Nicolas Langlois (1640–1703) or François de Poilly (1623–93), often grouped in series: Livre de fleurs (10 pls); Vases de fleurs propre pour les peintres, brodeurs et dessinateurs (40 pls); Livres de fleurs propre pour les orfèvres et graveurs (8 pls, signed v. f. with the annotation à Blois). According to Mariette, Vauquer was skilled in drawing flowers and particularly excelled in engraving flowers and other decorations on jewellery’ (Grove Art).
Contemporary and later collections of these plates are rare and show considerable variation, the individual parts and probably the plates themselves sold and bound to order. Our collection has the 10 numbered plates of the Livre de Fleurs, each (save the title) showing a well chosen bunch of flowers in globular glass vases, exquisitely rendered; then the four following plates with the Langlois imprints show stems of different flowers bound with ribbons, while the remaining plates are detailed studies of flower forms. Dunthorne, Flower and Fruit Prints of the 18th and early 19th centuries (1938), 317.