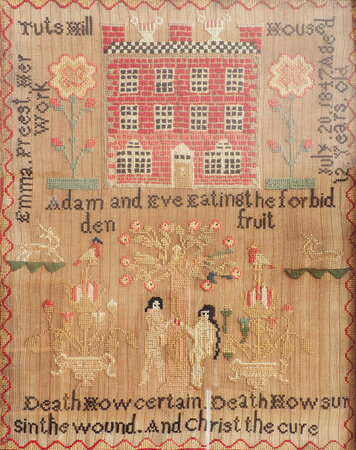 Emma Preest is possibly the Emma born on the 8th June 1835 at Bream Eaves, Gloucestershire and baptised in the Wesleyan chapel at Monmouth — certainly that would accord with her given age (12) in 1847 when she made this sampler. The identity of Tuts Hill house is not straightforward, there having been two houses so named in the vicinity of Tidenham, Chepstow. We can find no pictorial evidence of either of them as a three-storey, four bay house as in Emma’s depiction, and no Preest family associated with either. But if one accepts the likelihood of Emma being Gloucestershire born, both houses would have been some ten miles from her birthplace, suggesting the possibility she entered service at one of them at the age of 12 (quite possible) and that this may have been an ‘apprentice’ piece. Young girls were taught this kind of sewing not so much as a primer in reading (still less writing) as in household needleork and linen labelling.

The verse is a variation of a popular gravestone epitaph: ‘Life is uncertain, death is sure, Sin the wound, and Christ the cure. If we have correctly identified Emma Preest, she married in 1854, had several children and emigrated with her family after 1870 and died in 1915 at Shawnee, Perry County, Ohio, USA, aged 80.