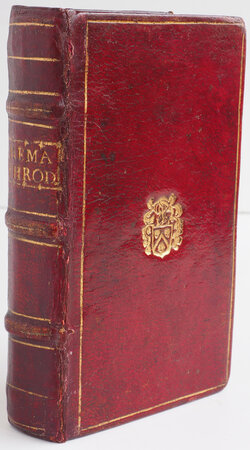 First edition of Artus’s satire on Henri III of France (assassinated in 1589) who was reputedly fond of cross-dressing and whose court was widely criticised for decadence and immorality.

Les Hermaphrodites describes a realm populated by men who dress as women, not strictly hermaphrodite but preoccupied by dress, hairstyle, makeup, extravagant gesture and speech. Also concerned with the laws and customs of the hermaphrodite kingdom, the satire operates by presenting Henri’s court as both dissolute and against nature. In so doing it reflects in great detail contemporary attitudes (both positive and negative) to gender-blurring of any sort, whether social or sexual. At one point, for example, Artus writes ironically that cross-dressing was perfectly permissible: ‘Chacun pourra s’abiller à sa fantasie, pourveu que ce soit bravement, superbement, & sans aucune distinction ny consideration de sa qualité ou faculté’, thus combining his disapproval with a suggestion of the negation of natural order or rank.
The engraved title depicts a figure of ambiguous gender (perhaps Henri himself) in male breeches, but full-hipped, with a suggestion of female breasts and a floral coiffe, with the legend ‘A tous accords’. Below it is the text:

Henri’s sexuality was the subject of numerous contemporary satires. His taste for cross-dressing was well-known and his sexual orientation a matter of speculation, since he enjoyed close relationships with his male mignons (providing plenty of ammunition for moralistic detractors) but also well-publicised affairs with a succession of mistresses.

The second part of the book is Discours de Jacophile a Limne. Les Hermaphrodites was republished in 1724 with the title Description de l’isle des Hermaphrodites. This reprint is comparatively common, while the first edition is notably rare.

The arms of the contemporary binding are of the Clausse de Marchaumont family, probably those of courtier Henri (d. 1613), the eldest son of Henry II’s secreatary of state Cosme Clausse, who served as Henry III’s ambassador to the Swiss states.