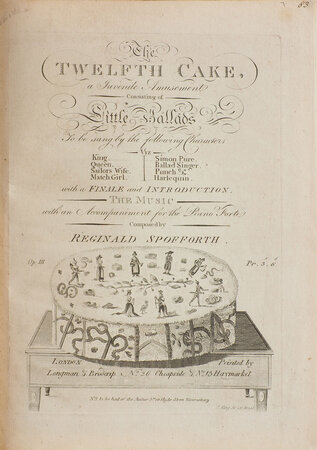 SPOFFORTH, Reginald. ~ The Twelfth Cake, a Juvenile Amusement consisting of little Ballads to be sung by the following Characters viz King, Queen, Sailor Wife, Match Girl, Simon Pure, Ballad Singer, Punch & Harlequin with a Finale and Introduction. The Music with an Accompaniment for the Piano Forte... London: Longman & Broderip No. 26 Cheapside & No. 13 Haymarket. NB to be had of the Author No 10 Hyde Street, Bloomsbury, [n.d. but 1797].

Small folio (332 × 228 mm), pp. [1], 17, [1], engraved throughout, including title with large decorative vignette, advert (p. 1) and music, the individual pieces with a total of 7 portrait vignettes at their head. Early manuscript pagination to upper forecorners (83-102). Preserved in modern marbled boards. A very good copy.

First edition of this wonderful compendium of juvenile songs in honour of the tradition English Twelfth Night iced plum cake, with each song sung by a different character, including King, Queen, Harlequin and Punch. The title vignette is typically immense, decorated with ribbons and swags and miniature figures of the characters, laid on a table ready to be cut. Though undated The Twelfth Cake was reviewed in the January Monthly Magazine of 1798, so was probably issued before Christmas, i.e. in 1797.

‘Although his earliest publications were of solo songs, Spofforth’s importance as a composer is based on the numerous glees (about seventy-five in number) that he published from 1796, many of which also appeared in anthologies.... Spofforth composed many songs and duets and left three books of nursery-rhyme settings, but no instrumental or sacred music.

Spofforth was chorus master at Covent Garden for a time, and wrote various songs and glees for productions there, but turned down an invitation to succeed William Shield as musical director in 1797. He also served as organist at Fitzroy Chapel and later at Eltham parish church, and was active as a teacher’ (Oxford DNB). Osborne Collection of Early Children’s Books, II, 661-2 (suggesting c. 1800 as the date of publication). Worldcat lists copies at BL (erroneously dated 1807), Cambridge (erroneously dated 1778-1787, which is unlikely), Yale, Alexander Turnbull Library (NZ), Toronto (the Osborne copy), Princeton