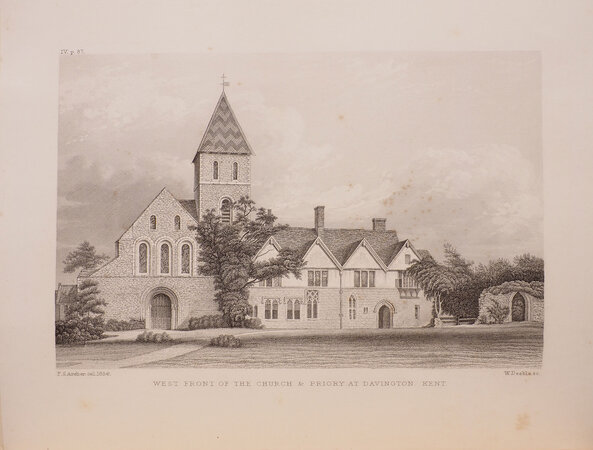 WILLEMENT, Thomas. ~ Historical Sketch of the Parish of Davington in the County of Kent and of the Priory there dedicated to S. Mary Magdalene. With appendices and plates. London: Basil Montagu Pickering, 1862.

First edition, one of 250 copies (of a total edition of 280). Thomas Willement was one of the pioneers of the nineteenth-century gothic revival. He worked alongside his better-known contemporary Pugin on several projects, but never very happily: Pugin later (unfairly) accused Willement of being only interested in money. Willement is perhaps best known for his stained glass in the medieval style (St George’s Chapel, Windsor, Hampton Court, Barbados cathedral). Davington priory (acquired by him in 1845) was an exercise in the complete medieval revival of a much altered priory house and church, involving polychromatic painted decoration, stained glass, and designs for encaustic tiles, together with purchases of furniture and fittings. Much of the work described in the Historical Sketch remains intact. 250 copies of this descriptive publication were printed on ‘foolscap quarto’ paper, with a further 30 copies on tinted ‘crown quarto’.