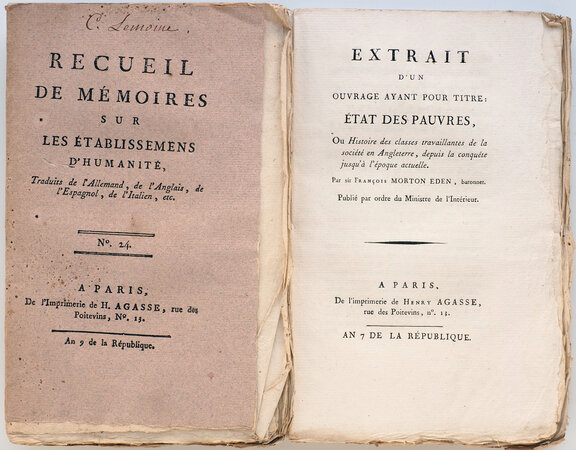 First edition in French of any part of Eden’s The State of the Poor. Or, an History of the Labouring Classes in England (1797) one of the classic works in the history of economics and the foundation of the discipline of sociology. This extensive but partial translation formed numbers 21 and 24 of the rare Recueil de Mémoires sur les établissemens d’humanité, continuously paginated across the two volumes. The editors’ preface notes the timeliness of such a translation at a time of revolutionary upheaval when no system of social security for the poor existed in France. Issued anonymously the translation is attributed to A.-C. Duquesnoy by Rochedieu. It precedes the edition translated by La Rochefoucauld-Liancourt of 1800 and is very rare. Rochedieu, Bibliography of Translations of English Works 1700-1800, 95. Cf. Printing and the Mind of Man, 249 (the English edition). Besides the British library copy (incomplete, apparently the first volume only), Worldcat locates no other copies outside continental Europe.