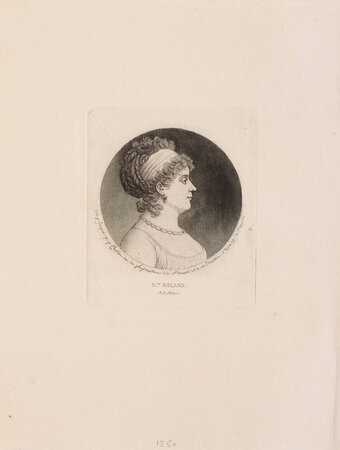 A rare miniature portrait of the French revolutionary, madame Roland (née Phlipon, b. 1754) who was executed during the Terror in 1793, having (with her husband) been a powerful and influential member of the Girondin faction. Produced by physionotrace (and thus probably made from life) the miniature was made from a drawing by Fouquet. The ‘physionotrace’ method was invented in 1786 by Gilles-Louis Chrétien (1774–1811) and used a profile cast with a lamp onto a glass screen, which was then copied by pantograph-like levers. Before the advent of photography it was an economic and effective way of producing portraits from life.

Chrétien worked initially with the miniaturist Edme Quenedey des Riceys to produce his portraits, but they separated in 1789, and Chrétien went into partnership with the engraver Jean Fouquet (d.1799) fom 1793. Since Madame Roland was executed later that year, this may have been one of his earliest portraits. It is also probable the earliest identified female subject engraved by Chrétien (predated by two or three unidentified women). The imprint reads: ‘Dess. par Fouquet gr.p. Chrétien inv. du physionotrace...’