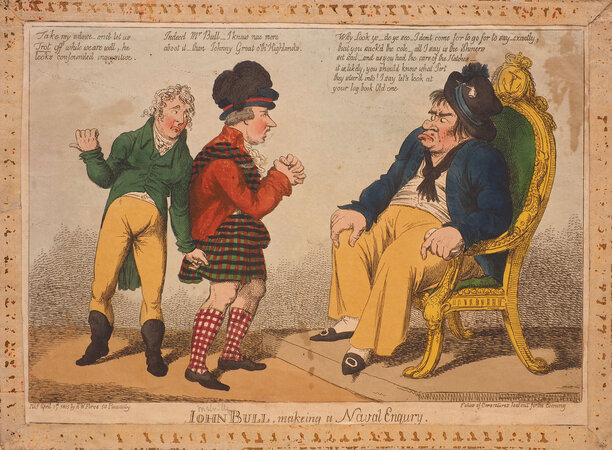 An April 1 satire on Henry Dundas, 1st Viscount Melville, who was accused of appropriating funds for non-naval purposes during his tenure as Lord of the Admiralty. His trial was a sensation and attracted a huge audience in Westminster Hall. In this print, when interrogated by John Bull in naval dress, he replies simply: ‘Indeed Mr Bull - I knaw nae more aboot it - than Johnny Groat o'the Highlands.’ The satire is revealing of the prevailing anti-Scottish sentiment provoked by the case.

Fores’s imprint advertises ‘Folios of Caracatures lent out for the Evening'.

Dundas was the most prominent Scottish politician of his era and instrumental in the progress of the Scottish Enlightenment. He is commemorated by one of the most prominent memorials in Edinburgh, the column and statue in St. Andrew’s Square. His commemoration is contentious — Dundas having effectively delayed the abolition of slavery for several years. BM Satires, 10381.