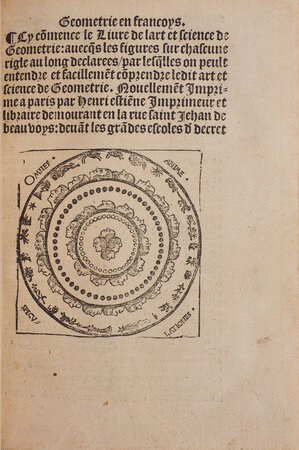 First edition of the first geometry manual published in French ― considered the earliest scientific manual in French. Bovelles stood at the beginning of a new French tradition of teaching science and mathematics in the vernacular, and his aim (stated in an interesting preface) was to provide a text not for the speculative Latinist, but for the ‘common workman’. This was more than simply an author’s trope, since his text is indeed practical throughout, regularly referring to the material and physical conditions of the figures in question, not simply their theoretical forms, ‘implying that this geometry belongs to craftsmen, not scholars’. ‘[Bovelles] published the Géometrie François in 1511, the same year that the first illustrated edition of Vitruvius’s ten books on architecture was published in Venice. Unlike Vitruvius, however, Bovelles claimed to have written his book not for elite, Latinate readers, but for those he called ‘common’ [plebes] workmen. Today, this book exists only in few copies, and it was not reprinted.’ (Ooosterhoff, ‘Early French Readerships of technical Print’ in Translating Early Modern Science, eds. Fransen, Hodson, and Enenkel (2017), p. 209). The book proved popular and enduring with new editions of 1542, 1547 (enlarged), 1551, 1555 (two), 1557, 1566 and 1608.
Born in Picardy around 1471, De Bovelles studied at Paris with the humanist Jacques Lefèvre d’Etaples though evidently left the city during the plague of 1495 without taking a degree. He subsequently worked on numerous mathematical problems, notably squaring the circle by mechanical means, of which he gave an account in the Latin Geometricae introductionis published in 1503. This book was followed by Liber de XII numeris in 1510, considering perfect numbers, and by the present Géometrie of 1511. Besides mathematics De Bovelles is important for his 1509 De Sapiente in which he suggested that human perception did not necessarily mirror reality but also created it ― a work which was to have a tangible influence on Descartes. Very rare. With no UK or US copies and no copy in the Bibliothèque nationale we can locate only two copies in French libraries (Blois and Rouen) and a copy at Ghent. Inventaire chronologique des éditions parisiennes du XVIe siècle, II, Paris, 1977, no 29; Bechtel, Gothiques français, p. 311; Renouard, ICP, II, 29; not in Renouard, Annales de l’imprimerie des Estienne, Paris, 1843. R. Taton, ‘Bovelles et les premiers traités de géométrie en langue française’, Charles de Bovelles. Colloque de Noyon, 1979, Paris, 1982, p. 183-196.