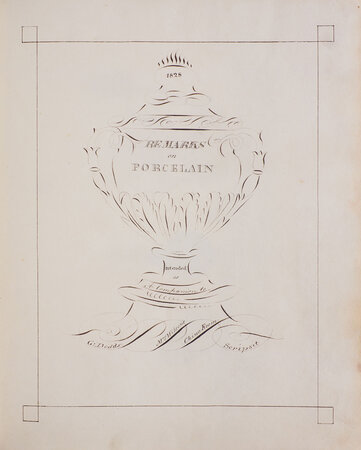 An illustrated companion to the private china collection of Mrs Sophia Wilson of Ledstone (Yorks), beginning a history of ceramics from its beginning to the date of composition, including the origins of porcelain in China, and recent developments in Europe by Wedgwood and the factories of Sèvres, Dresden and Berlin. There is also an interesting account of the process of contemporary British transfer decoration, illustrated with an original transfer paper:

‘When the paper comes from the printing press, it is, of course, found to be stamped with the intended pattern. It is then delivered, while wet with the colour, to a girl, who cuts off the supefluous paper with a pair of scissors, and passes it to another girl, who immediately applies it to a piece of biscuit ware, and then delivers it to a third who fixes it more firmly by rubbing it very hard with a piece of flannel tightly rolled’ [and so on].

The lithographs are evidently original (and probably not published elsewhere) and the manuscript may have been destined for private publication in lithograph, since we know that Dodds prepared a similar collection guide for Mrs Wilson’s collection of fossils Companion to the Minerals and Fossils, Contained in the Ledstone Museum (1827), privately printed. It is also known that the Wilsons had moved by 1834 to another part of Yorkshire, living at Oxton Hall near Tadcaster from 1841.

Sophia Wilson was evidently a major collector. The last few pages of the manuscript contain a description of her china rooms: with a vast Chinese ceiling lamp, two Sèvres urns (the gift of George IV), ‘a group representing a bower formed of espaliers and flowers in which is a negro with a flower basket, the gift of the Marchioness of Hertford’, together with other gifts from the Earl of Strathmore, the Countess of Darlington, Countess Fitzwilliam and the Countess of Lonsdale (and several others).

The author, George Dodds, was curate of Rochdale (Lancs), then Gainsborough (Lincs). He was educated at Pembroke Hall, Cambridge and became chaplain to the Marquis of Queensberry.