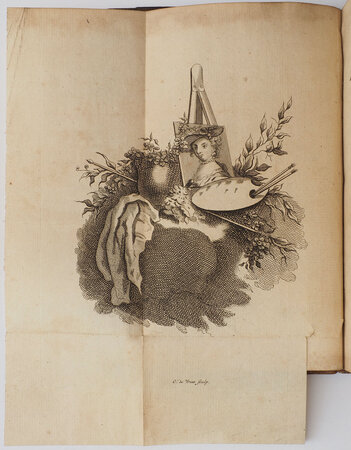 First edition with an illustration. A treatise on miniature painting on glass, in the form of a dialogue between the author and his female pupil, a marquise. Vispré’s method was based on the transfer application of an engraving to a glass or mirrored surface, allowing the amateur artist to make superb reproductions in ‘under three hours’. The book, which first appeared in 1755 (without a plate), seems to have been as much an advertisement for Vispré as both a tutor and supplier of artists’ materials to a fashionable clientele, and the two earlier editions (like this one, surprisingly rare) give his address in the rue Pavée, beside the Comédie Italienne.

By 1766, when this edition appeared, Vispré had settled in London making his way as a successful portrait painter and miniaturist, exhibiting first with the Society of Artists and then quite frequently at the Royal Academy. This edition is the first to include a plate, perhaps designed to be used by the pupil as a test piece.