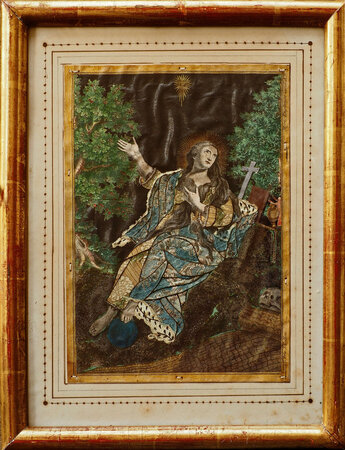 A striking and well preserved ‘dressed print’ cut from one of the popular devotional prints by Martin Engelbrecht. The weeping Magdalene has been modified by being pasted onto glazed paper, giving a dramatic black-sky background, her robes are embellished with three different brocade fabrics (two with metallic thread), and the print further enhanced with hand-colouring, some metallic lace and ground glass. As often, the dressing has been ingeniously applied both under and over the surface of the original engraving. The print includes Mary’s traditional attributes of a cross, a book, a myrrh jar and skull, while her left foot rests on a globe or orb.

The fashion for dressing prints existed probably from the origin of printed illustrations themselves, though it was a widespread, predominantly female recreation during the seventeenth and eighteenth centuries, often with a devotional intent. It is hard to be sure when the print was dressed or adorned. The print dates from the mid eighteenth century. Having been stitched at 10 points around the margin to a ruled backing paper, it must have been framed in the following century, to judge by the framer’s label. The colouring and character of the applied materials suggest it was adorned in the eighteenth century, though the problem of dating is compounded by the widespread use and recycling of earlier materials.