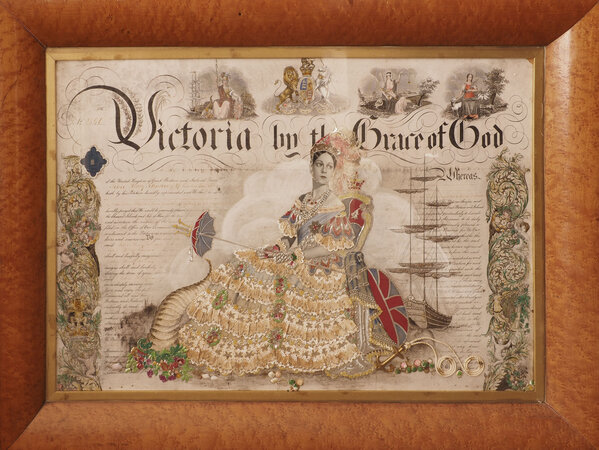 A SUPERB LARGE-SCALE COLLAGE BY ICONIC PHOTOGRAPHER AND DESIGNER ANGUS MCBEAN, COMBINING MANUSCRIPT MODIFICATION, SURREALISM AND HIGH CAMP. It uses portions of McBean’s own original photograph of actress Pamela Stanley as the young Queen Victoria in the adaptation of Laurence Houseman’s Victoria regina (1934) at the Gate Theatre in 1938 ― an image from his surrealist series for the weekly Sketch magazine, (bromide print, 1938 original size 289 × 239 mm).
Angus McBean (1904-1990) was one of the most important theatrical photographers and designers of his era and transcended the confines of his medium through his brilliant and eccentric collages made throughout his career. The Pamela Stanley photograph series brought together two of his personal icons, the actress and Queen Victoria, here used with iconoclastic glee to modify an enormous engraved and calligraphic royal grant of 1853 (to one John Henry Johnson of Lincoln’s Inn) with added hand colouring, ink drawing, cuttings from the original photograph, gilt paper decoupage, glitter, shells and string. McBean made collages throughout his later career, often in the form of miniature stage sets which he then photographed for this much-prized Christmas Cards. This Queen Victoria collage is among the largest he attempted and was part of the collection left on his death to partner David Ball.

The Hon. Margaret Pamela Stanley was the daughter of the 5th Baron Stanley of Alderley and acted on the stage and in films in the 1930s as Pamela Stanley. She appeared on Broadway as Ophelia opposite Leslie Howard in Hamlet before a triumphant return to London in her role as Queen Victoria in June 1937. Provenance: The Angus McBean Collection, 12 April 2013, Lacy, Scott & Knight (Bury St Edmunds), lot 242.