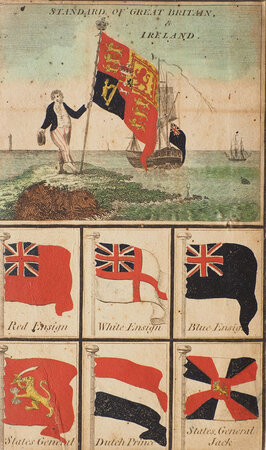 A rare pictorial guide to naval ensigns. This 1807 issue in book form is made up from all 18 portions of an engraved chart first issued by Heather in 1800, with an added letterpress label. The flags include all the known naval ensigns, including those of privateers and pirates. 125 naval ensigns begin with the principal British flags and continue with those of all the major European countries and their principal ports, then China, Persia, the United States and the major trading companies, such as the Dutch and British East India Companies. There are two pirate flags, entitled ‘Rovers’, and ‘Algerine Rover’ [Barbary Pirates]: the ‘Rover’, coloured red, is marked with a winged hourglass, a raised arm holding a cutlass and a skull and cross bones; the ‘Algerine Rover’ is also coloured red but marked with a skull.

The 1800 chart bore an engraved dedication at the head ‘To the Right Honourable the Master Wardens, elder Brethren of the Trinity House’ not used in the book, though the Trinity House arms are added as a cover label. Rare, especially in book form. Worldcat lists the National Maritime Museum and UCLA copies only.