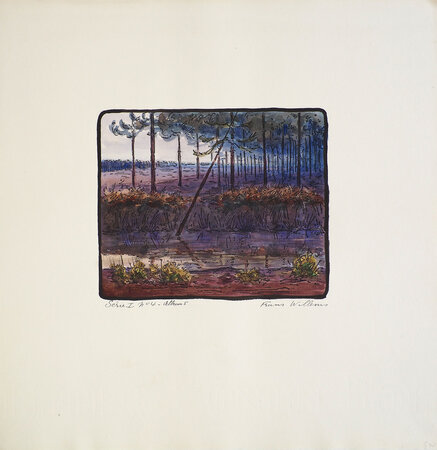 12 fully hand coloured lithographs (each c. 140 × 168 mm, sheet size 340 × 340 mm), each signed by the artist, with tissue guards (one torn away) and printed caption sheets. Loose as issued in original cloth portfolio with ties. Slightly rubbed and spotted.

An atmospheric series of watercoloured prints of the German-controlled Dutch-Belgian border in 1915 by a Belgian artist in exile in Holland. Issued in very small numbers (perhaps no more than 20 copies), it is marked ‘Série 1’, but no more were produced. Some of the images show the high-voltage electric fence erected by the Germans in 1915 to put an end to clandestine cross-border traffic between Holland and Belgium. On Belgian territory, the fence ran from the German border, from just behind Vaals (Limbourg) all the way to the Belgian coast. The Elektrische Grenzabsperrungszaun claimed many lives though smugglers soon refined their methods and the border was never completely sealed.
Willems had studied in England (notably the watercolours of Turner) but was at home with his family in Belgium when war broke out, fleeing to Holland in 1914, where these remarkable and evocative prints were produced and published the following year.