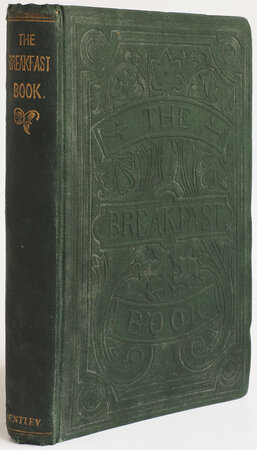 [HILL, Georgiana]. ~ The Breakfast Book: A Cookery-Book for the Morning Meal, or Breakfast Table; comprising Bills of Fare, Pasties, and Dishes adapted for all Occasions. London: [Willima Clowes and Sons for] Richard Bentley, 1865.

First edition. Hill’s numerous books were among the most popular cookery books of the nineteenth-century, though now less well known than Mrs Beeton. The Breakfast Book is a wonderfully comprehensive to the middle class English Victorian breakfast, eaten across the British Empire, often consisting of several courses and a stomach-groaning spread of meats, fish and pastries, enlivened with fruit. Includes bills of fare fir set breakfasts for eight to twelve people. ‘Brain cakes’, beefsteaks, caviar, prawns and oysters all feature.

She published at least 21 books, almost all anonymous, from The Gourmet's Guide to Rabbit Cooking (1859) to How to Cook Vegetables in One Hundred Different Ways (1868) and numerous articles. ‘Hill's titles reveal her particular approach, which was that of the specialist and expert, at a time when the fashion was more for the compendium style of recipe collection, most famously characterized by Beeton's Book of Household Management (1861). She drew extensively upon examples of different approaches to food and cooking elsewhere in Europe’ (Rich in Oxford DNB).