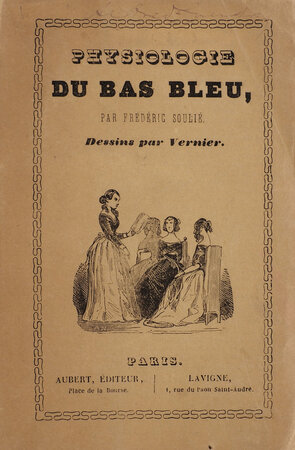 A satire on educated women, one of the many such little books illustrative of ‘the craze that swept Paris in the early 1840s for a series of small illustrated volumes marketed under the general title of physiologies [looking back, perhaps, to Brillat-Savarin’s bestselling Physiologie du goût (1826) and Balzac’s Physiologie du marriage (1830)]. Some 120 different physiologies were issued by various Parisian publishers between 1840 and 1842 (ranging alphabetically from the Physiologie de l’amant to the Physiologie du voyageur), and it is estimated that approximately half a million copies of these pocket-sized books were printed during the same two-year span’ (Sieburth, p. 163).

‘Quickly produced and marketed, consumed and discarded, … the physiologies (like the sensational tabloids or canards hawked on Paris streetcorners of the period) are early instances of the cheap, throwaway “instant book” whose appeal lies in its very topicality and ephemerality’ (op. cit., pp. 165–7). Richard Sieburth, ‘Same difference: the French Physiologies, 1840–1842’, Notebooks in Cultural Analysis, (Duke UP, 1984), pp. 163–200.