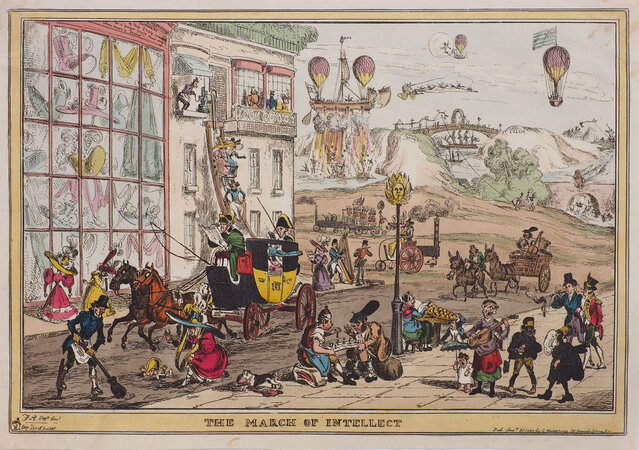 ‘Writing to The Times in May 1824, the industrialist and philanthropist Robert Owen remarked that in recent years ‘the human mind has made the most rapid and extensive strides in the knowledge of human nature, and in general knowledge’. He called this ‘the march of intellect’ and believed it had reached a pace that could not be stopped. Building upon this, Henry Brougham established the Society for the Diffusion of Useful Knowledge in 1826, with the purpose of enabling the education of the masses. The phrase ‘the March of Intellect’ became a rallying cry for social and technological progress, its importance being to give all classes the opportunity to better themselves. To others, though, it was seen as giving hope where in fact there was no opportunity and of raising people above their station. Would the March of Intellect benefit society or stagnate it?

Amongst those uncertain of its benefits was cartoonist William Heath who, in 1828, under the pen name Paul Pry, produced a series of posters called the March of Intellect. Even though Heath was satirising the movement, his posters include some wonderful future ideas for transport, including a steam horse and a steam coach, a vacuum tube, a bridge to Cape Town, and various forms of flight, including a flying postman’ Ashley, ‘Inventing the Future’, British Library website, Discovering Literature: Romantics & Victorians.