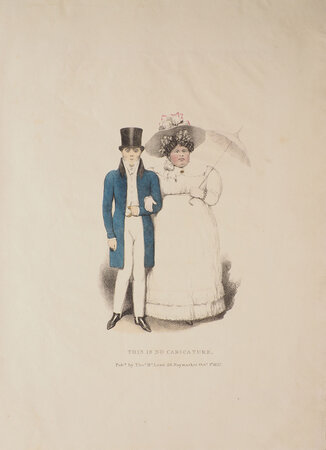 In 1827 Harriet Mellon, widow of the banker Thomas Coutts married William Beauclerk, 9th Duke of St Albans. The daughter of a family of travelling players, Harriet had become an actress at an early age and was spotted by Coutts while performing in London. As a young woman she was widely celebrated for her beauty, and was painted by George Romney and Sir Thomas Lawrence. She became wealthy (as a senior partner of Coutts bank) and was 23 years older than Beauclerk on their marriage, providing ample scope for unkind commentary and ammunition for the satirists. Nicknamed ‘The Jolly Duchess’ Harriett enjoyed her wealth, was a great collector and generous patron. She wrote to her friend Sir Walter Scott:

‘What a strange eventful life has mine been, from a poor little player child, with just food and clothes to cover me, dependent on a very precarious profession, without talent or a friend in the world – first the wife of the best, the most perfect being that ever breathed …and now the wife of a Duke! You must write my life… my true history written by the author of Waverley’. (Scott’s Journal, 30 June 1827).

After her death, she left an allowance to the Duke but her fortune passed to step-grandaughter Angela Burdett-Coutts, whose philanthropic association with Dickens is well known. BM Satires 15461.