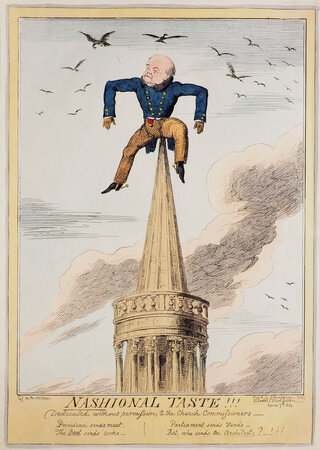 Architect John Nash is impaled on the spire of his new All Souls church in Langham Place, Marylebone, completed in 1823 as part of his grand plans for the costly ‘improved’ swathe of London stretching from the lower end of Regent’s Street to Regent’s Park. With its rotunda and idiosyncratic steeple thhe landmark church was not universally admired. This plate is subtitled: ‘Dedicated without Permission, to the Church Commissioners. Providence sends Meat, The Devil sends Cooks, Parliament sends Funds, But, who sends the Architects?!!!’
Dorothy George describes it thus: ‘An illustration of the debate of 30 Mar. when H. G. Bennett demanded the name of the architect of the church being built in Langham Place. ‘He should also like to hear what this mass of deformity had cost’, and professed himself ready to subscribe towards the cost of demolition. Under pressure, Arbuthnot admitted that the architect was Nash.... [who] is reputed to have commented to his assistants on this print: ‘See, gentlemen, how criticism has exalted me.’ The Times, 10 April, derided the spire as adapted to spike cranes in a war of the future with pigmies, envisaged by the architect’. BM Satires X, 1952.