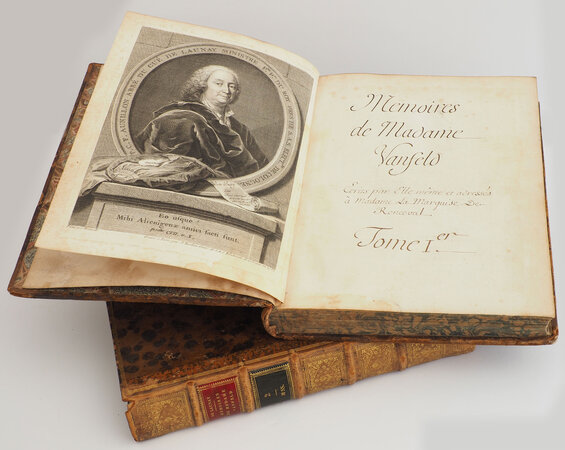 Manuscript, 2 vols, 4to (240 × 175 mm), pp. vii, [1], 330; [2], 331-711, [3], plus engraved portrait and 4 frontispieces in pen, ink and wash (3 of which are captioned ‘Dessinée par L. Vigé’), calligraphic titles and headings. Mainly in one neat mid eighteenth-century hand, corrections and emendations in another, slightly later notes to end leaves in the same hand or another. Contemporary mottled calf, marbled edges, rebacked in the nineteenth century with gilt panelled spines. Later bookplates of Th. de Jongue.

A contemporary manuscript, probably authorial, of an unpublished novel, aptly described by the French literary euphemism as ‘plus que galant’. By the colourful abbé Aunillon, who was evidently more interested by the intrigues of the salon and the coulisses of the Parisian theatres than the contemplations of the cloister, Memoires de Madame Vanfeld tells the story of the corruption of a young woman and of her subsequent scandalous exploits, almost invariably at the hands of a series of depraved clerics. Told in the words of Madame Vanfeld herself and addressed to a confidant, the marquise de Ronceval, the novel is one of illicit liaisons in convents and country houses, and of stolen moments out of sight of family and convent superiors. It is never precisely explicit but is always entirely transparent. The preface describes it as a roman à clef, with names changed, and a list of the original characters supposedly consigned to the flames. A slightly later editor has made numerous corrections and emendations to this manuscript, including changing most of the names once more. A note at the end in a later hand, suggests that the action has at least some basis in fact, pointing to correspondences between at least one episode and passages in Aunillon’ Mémoires published in 1808.

Aunillon (1684-1760) was descended from a prominent Anglo-Catholic family (said to have changed their name from O’Neill to Aunillon). A fascinating figure he seems to have turned his back on the church to concentrate on writing for the theatre. He wrote several plays, a fairy tale, at least one other novel and is said to have been a permanent fixture in the Parisian theatres, where he befriended the actresses and became their confidant. He also appears, in 1746, to have acted as a French secret agent in the Rhineland.

The illustrator Louis Vigée (1715 – 1767) who supplied the four fine illustrations here was a French portraitist, fan painter, artist in pastels and a member of the Académie de Saint-Luc (and a friend of Vernet and Greuze). He is perhaps most notable as the father of the painter Élisabeth-Louise Vigée-Le Brun. He was also a correspondent of Madame de Graffigny, and a transcript of a letter from her, having read the Memoires is found at the end of the second volume here. The manuscript corresponds with that described in the sale of the library of A.L.S. Bérard, Paris, 7 May 1829, lot 1088, where the manuscript corrections are described as being in Aunillon’s autograph.