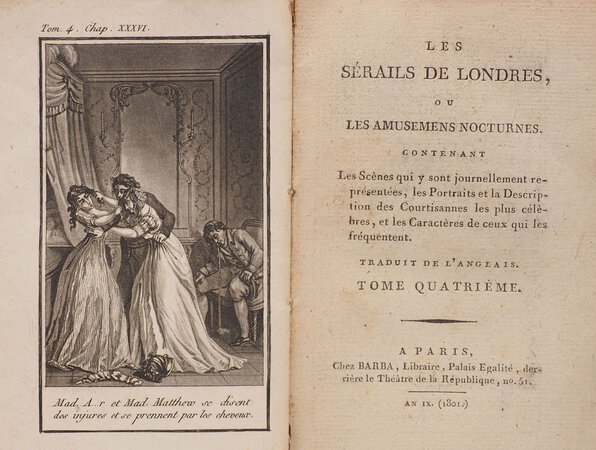 First edition in French of Nocturnal Revels: or, the History of King’s-Place, and other modern Nunneries (1779), a guide to the brothels of London.

Both the English editions and this French edition are very rare. Though jovial and sometimes exaggerated Nocturnal Revels ranks with Fanny Hill and Harris’s List amongst the most important sources for sexual culture in eighteenth-century London. It purported to be the work of ‘A Monk of Saint Francis’, a reference to the notorious Monks of Medmenham (later Dashwood’s Hell-Fire Club) but its real authorship remains unknown. The focus is on the Mayfair street of King’s Place, where women such as Charlotte Hayes founded successful establishments catering to a wealthy and aristocratic clientele, and the narrative contains extended biographies of a range of female sex workers, including Charlotte Hayes herself, Lucy Cooper, Jane Goadby, Lucy Palmer, Kitty Nelson, Nelly Elliot, Madame Dunbery and ‘Negresse Harriot’ (An Afro-Jamaican immigrant). The second volume contains the intriguing story of Julius ‘Othello’ Soubise, the Caribbean-born London man-of-fashion, who attempted to lighten his skin to win the affections of a ‘Miss G-’.

The English editions had been unillustrated, but each volume of Serails de Londres includes a fine frontispiece with scenes from the fashionable brothel interiors. Cohen-De Ricci 9950; Gay III, 1104-5; cf. Ashbee I (’Index Librorum Prohibitorum’), p. 321. Worldcat records copies at BL, Bn, University of Erfurt and State Library of Victoria only (there is also a copy at the Lewis Walpole Library, Yale). It is almost as rare as the English original (of which ESTC lists 4 copies of the first edition and 2 of the second edition).