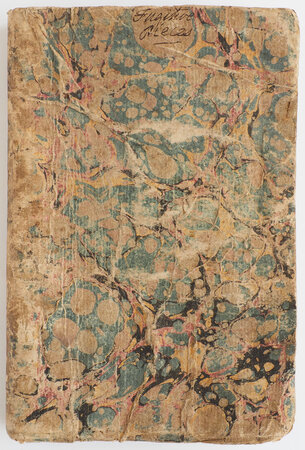 8vo (166 ×100 mm), pp. 11-196 only, plus engraved frontispiece, bound together with a few leaves from other issues of the same work. Quite tightly bound in eighteenth-century marbled paper covered stiff boards, linen spine stiffener (inside), one further wrapper bound at rear, titles in manuscript to spine and upper cover. Worn but rather attractive.

An eighteenth-century homemade binding of a portion of a popular literary and satirical miscellany, a reminder that not all reading from perfect copies. The New Foundling Hospital for Wit appeared from 1768-7) and was a vehicle for John Wilkes and his radical bookseller John Almon, each issue audacious satirical engravings. This one includes, as a frontispiece, ‘A Citizen of the World searching for a Wise Prince’ in which blindfolded man walks an empty street carrying a lantern and wearing a long, furred civic gown. On a sign board overhead is a portrait of Augusta, Princess Dowager of Wales and a jackboot, the emblem of the Earl of Bute. Below is a quote from Shakespeare: ‘Who says ‘Alack, there lies more peril in thine eye than twenty of their swords (Romeo and Juliet).

Among the various verses we find Richard Berenger’s ‘On the Birth-Day of Shakespeare’ originally included in The World.