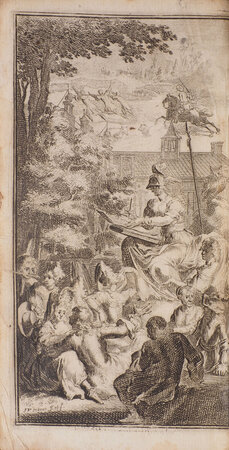 Aulnoy’s fairy tales were first published in 1697-8 as Les Contes des fées by Barbin in Paris (in four volumes) and were followed later in 1698 by four volumes of new tales (also printed in Paris, by Catherine Legras and Nicolas Gosselin) entitled Contes nouveaux ou les Fées à la mode. Copies of these first editions are now almost unobtainable (even in libraries, and they are habitually described as ‘lost’ or ‘untraceable’ — though Volker Schröder of Princeton has recently traced the few known copies and fragments in a series of posts on his blog, Anecdota). Pirated editions bearing a false ‘Trévoux’ imprint appeared a few months later, with unrelated woodcuts from another source, and again surviving in less than a handful of copies.
These editions were followed by La Haye editions by Uytwerf appearing between 1698 and 1700, of which ours is one and which are only fractionally less rare than the first editions. They were entitled Les Contes de fées (1698) and Nouveaux Contes des fées (1700). Our Nouveaux contes comprises the tales from volume 3 and 4 of the Paris Barbin editions, namely: I. Preface; Don Gabriel Ponce de Leon, nouvelle Espagnolle; Le mouton; Finette cendron; Fortunée; II. Babiolle; Don Fernand de Toledo; Le Nain jaune; Suite de Don Fernand de Toledo; Serpentin vert.
The fine engraved headpiece illustrations are reproduced from the originals in the Barbin editions, but the engraved frontispieces are from an entirely new plate by Jan van Vianen, showing the striking figure of a female story teller (in the guise of Minerva) surrounded by fashionably-dressed listeners and with scenes from tales played out in the clouds above her head.
Of the tales gathered here, Le Nain jaune (The Yellow Dwarf) was easily the most enduring, perhaps Aulnoy’s most significant literary legacy — later appearing in numerous European versions both in print and on the stage. A tale of mothers, daughters, suitors and matrimony, Le Nain jaune is the tragic tale of the restless and spoilt princess Toute-belle who rejects her noble suitors and ends up betrayed by her mother and betrothed to the hideous Yellow Dwarf, later dying while attempting to escape her fate. Its afterlife was considerable, in literature and beyond. A French card game is named after it, and it became a popular subject for the stage, especially in England in various adaptations of the Mother Bunch story, and was retold notably by Andrew Laing in The Blue Fairy Book. Worldcat: Kansas and Princeton (the Cotsen copy) only outside Europe, both lacking the first frontispiece and the latter noticeably trimmed.