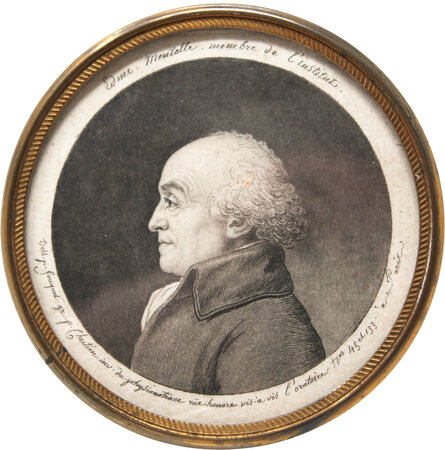 An aquatint produced by physionotrace, ‘the first system invented to produce multiple copies of a portrait, invented in 1786 by Gilles-Louis Chrétien (1774–1811). In his apparatus a profile cast by a lamp onto a glass plate was traced by an operator using a pointer connected, by a system of levers like a pantograph, to an engraving tool moving over a copper plate. The aquatint and roulette finished engraved intaglio plate, usually circular and small (50 mm), with details of features and costume, could be inked and printed many times. One description mentions that a sitting could take as little as six minutes and within four days a dozen impressions could be delivered, hand-colored if desired, with the copper plate, for fifteen francs …

‘Physionotrace was very popular in France, where it had a detrimental effect on miniature painting and engraving. At the Salon of 1793, one hundred physionotrace portraits where exhibited. Three years later that number increased to six hundred. The physionotrace portrait replaced the miniature and was used as frontispiece illustrations in a number of books, but it was not until the advent of photography that the portrait was truly democratized’ (Photoconservation.com, sub Printing Processes). Thomas Jefferson had his portrait done in Paris by physionotrace in 1789 (now lost, though a print was made in 1801: see Alfred L. Bush, The Life Portraits of Thomas Jefferson, p. 9).

Chrétien was a cellist in the chambre du roi at Versailles and worked initially with the miniaturist Edme Quenedey des Riceys to produce his portraits. They separated in 1789, and Chrétien went into partnership with the engraver Jean Fouquet (d.1799), responsible for the etching here. The subject is Edme Mentelle (1730–1815), geographer, who was elected to the Institut de France in 1795.