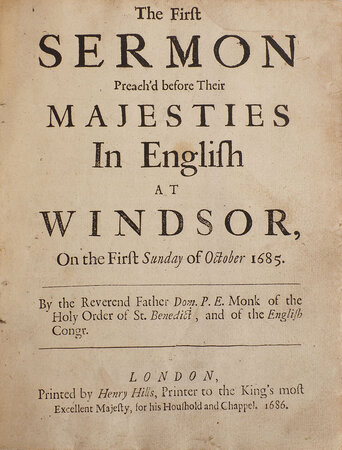 4. CARTWRIGHT, Thomas. A Sermon preached upon the anniversary Solemnity of the happy Inauguration of our dread Soveraign Lord King James II. In the Collegiate Church of Ripon, February the 6th. 1685/6. The Second Edition. London: printed by J. Leake, and are to be sold by Walter Davis, 1686, pp. [6], 38. Title page and final leaf slightly inky with various pen tests, blots and stains. Wing C707.

First editions (save for 4. Cartwright) of ten sermons delivered to the Royal Family at the Catholic Court of James II. Five are by James’s favourite, Philip Ellis, whose reputation as an orator began as a pupil at Westminster School, where he was reputed to speak ‘ex cathedra like an angel’ and nicknamed ‘Jolly Phil’. He converted to Catholicism while still at school and trod the path to Douai, entering the Benedictine priory of St Gregory. ‘After being ordained priest Ellis was appointed preacher-general in 1685 and sent to work in England. His abilities recommended him to the notice of James II, who appointed him one of his chaplains-in-ordinary and preachers. He was attached to the chapels royal at Whitehall, St James’s, Somerset House, and Windsor, where he became known as ‘the great pulpit man’ of the Catholics, and a number of his sermons delivered between 1685 and 1687 were published...’ (Geoffrey Scott in Oxford DNB).
Also included is the powerful sermon on repentance preached to Charles II’s widow, Catherine of Braganza (‘Queen Dowager’) by another royal favourite, John Dormer.