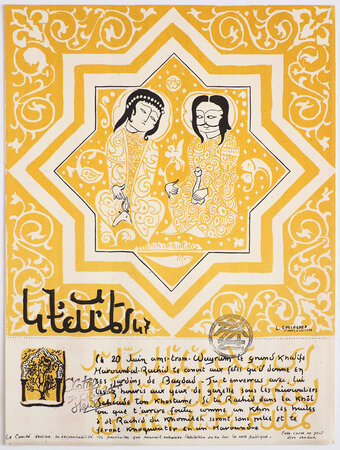 52 invitation cards (of various sizes), most printed in colour, many retaining the original perforated ticket coupon.

53 invitation cards to the notorious Parisian annual costume ball. The ball was inaugurated in 1892, and apart from the war years, ran until 1966, with attendance restricted to students and alumni of the École, both men and women, as well as a few ‘artistic personalities’ who had contributed to the preparation of the ball. They were held in several major venues scattered throughout Paris over the years, with most taking place at the Moulin Rouge, the Salle Wagram, and the Parc des Expositions at the Porte de Versailles. Although in its early years the ball was simply an elaborate party, from 1900 each ball had a specific historic theme, often derived from an ancient text or inspired by an ‘exotic’ foreign culture, around which various contests were arranged. With the addition of a theme the balls became more elaborate often turning into debaucherous, romping affairs with guests soon discarding the period costumes that they were required to wear to gain entrance. The nudity, dancing and merrymaking often continued into the following day, the ball usually ending, with a shout of ‘Vive les Quat’z’ Arts!’, around seven o’clock in the morning, followed by a procession through the Latin Quarter, the Louvre, and a march over the Pont du Carrousel to the Théâtre de l’Odéon, where the partygoers would disband.

Not surprisingly The Bal des Quat’z’Arts quickly became one of the premier events of the summer season. The invitations were elaborately designed to match the spectacle of the events, and correspondingly were often thematically orientalist, exotic, or primitive, with overtly erotic and sexual imagery. They are a tour de force of the evolution of artistic style, showing the progress from Art Nouveau to modernist primitivism, up through psychedelic design, though in retrospect they exhibit a troubling degree of predatory sexism and cultural appropriation. The ball is famously depicted in a series of photographs by Brassaï of 1930 and numerous other photographic records exist of the ball, allowing a comparison of the themes of the printed invitations and the costumes worn on the night.