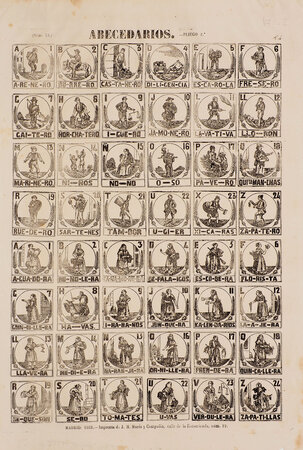 Two rare and decorative Spanish ABCs for use in the schoolroom, each with decorative woodcut squares for the letters of the alphabet. The dated example (1868) depicts men and women in a range of roles and occupations (a bagpiper, children, drummer, florist, calendar seller, etc) within attractive roundels with palms,the captions of each are divided into syllables. This sheet is numbered ‘13, pliego 2’, indicating it was probably part of a series of educational plates (unidentified). The undated example is not numbered and has a different sequence of decorative squares illustrating a range of contemporary occupations: including a shoemaker, carpenter, dentist, barber, grape seller, doctor, organist and acrobat. In each case the letter of the alphabet is given with a corresponding number.

J. M. Marés was a prolific publisher of juvenile literature and chapbooks in Madrid. Worldcat lists a number of large-format woodcut sheets, but neither of these titles, nor any other ABCs.