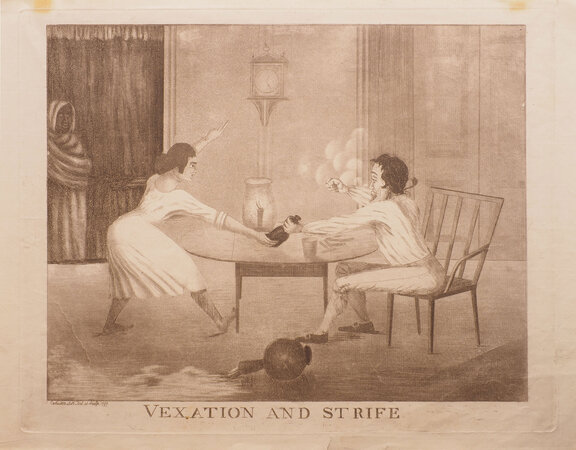 A rare caricature of domestic strife, Calcutta-printed by Scottish printmaker James Moffat (1775-1815), better known for his Indian topographical views popular among British colonial residents in India. A woman, dressed in a short shift, angrily pulls a bottle from the hand of a drunken man, who sits with his right fist raised and a cigar hanging from his mouth as smoke billows around his head. He holds onto a bottle with his left hand, a glass and pile of cigars at his elbow. The woman points with her left hand to a clock on the wall which shows the time as five past five. In the background on the left, a dark-faced, cloaked figure stands before the curtained doorway on the left.

‘Moffat was a Scotsman who arrived in India aged only 14, living in Calcutta from 1789 to 1815. He appears to have learnt his profession of drawing and engraving in India. According to Wynyard Wilkinson (‘The Makers of Indian Colonial Silver’, London, 1987, p. 137) he was apprenticed as an engraver to the silversmith John Ludvig Jacobi in 1789, and then worked from 1794-1804 for another silversmith John Mair and his successor firms, while engraving and publishing his own views. An advertisement in the ‘Calcutta Gazette’ in 1797 offering to produce ‘Picturesque copper-plate engravings’ led to a series of views of Calcutta and its environs.’ ?