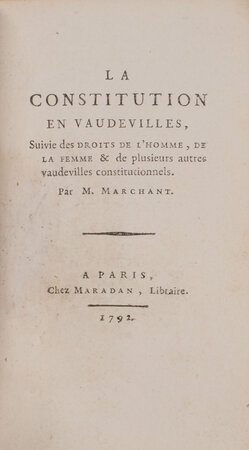 A satirical song collection, in the form of an almanac, lampooning the new Revolutionary institutions. The frontispiece (here in rare colour-printed state) is probably the first book illustration to depict a yo-yo, a toy which became a craze in France in the 1790s under the name of the émigrette, reflecting its popularity among the French nobility at precisely the time they were forced to flee their country. A 1789 painting of the future King Louis XVII now in the Louvre shows him with a yo-yo, while in a revival of the Mariage de Figaro of 1792 Beaumarchais brings his hero on stage playing with his émigrette.